From Toys To Vehicles. A Brief History Of Electric Kick Scooters

This page contains affiliate links. This means that we may get a small commission for recommending products, if you choose to click on something and buy it. This does not cost you anything, but we wanted to be honest and let you know!

There are those who think The Flintstones invented the kick scooters. Others believe these flying menaces were brought to us by aliens.

We have decided to shed a little light on the matter by conducting a brief research on the origins and history of the electric scooters.

We hope you’ll find it helpful and your respect for those who chose this means of transportation will increase. And, who knows, you may become a rider yourself!

It seems everything began in Germany in 1817 when some resourceful kids used pieces of wood and steel ball bearings to assemble a play item to roam the streets. There is no doubt you would have heard them coming on the road!

Then, when roller skate wheels were available, kids attached them to wood planks with a handle made of steel pipe. No steering, no brakes – extremely fun and dangerous to ride, especially downhill.

The official German Archives (Bundesarchiv) reveal that these first kick scooters were both homemade and manufactured for children. Races using these homemade wonders took place in Paris, Berlin, and Leipzig in 1930, 1948 and 1951.

The Europeans began to love them and made room for them in their culture. They soon reached Australia and other parts of the world.

On the other side of the Atlantic, kick scooters first enjoyed wide popularity during the Great Depression when children built their own, again using recycled wood like the European kids.

A period of up and down trends for these scooters followed until skateboards gained popularity among teenagers in the 1980s and scooters fell out of favor.

A notable moment in the history of the electric scooter came with the arrival of the first motorized kick scooter made by Autoped, a New-York based manufacturer in 1916.

This was a powerful, first-ever folding machine, with an air-cooled, 4-stroke, 155-cc front-wheel engine, front and rear lighting, a Klaxon horn, and a toolbox. What’s not to love?

The steering column, which contained all operating controls, could be folded down over the platform for compact storage.

It was produced between 1916 and 1922, and it had a limited, yet global, adoption from all walks of life – commuters, policemen, gangs, postmen, pilots and progressive feminists.

As you can imagine, due to its 90 lb. weight, this scooter was not suitable for carrying. Nevertheless, these rides must have been revolutionary when they first arrived on the market.

The Autoped, the first motorized scooter, and English socialite and political activist Florence Priscilla, Lady Norman, CBE was given this Autoped as a birthday present by her husband, the journalist and Liberal politician Sir Henry Norman. She used it to travel to her office in central London, 1916.

In 1974, the Honda company made the Kick’n Go, a scooter propelled by a pedal on a lever. As it took little effort to “kick” as a regular scooter, the novelty of it caught on and it became quite popular.

As the bicycles gained attention, there were some manufacturers who decided to make a sort of mix breed between the kick scooter and the bicycle and created BMX-like scooters, with small bicycle wheels and pneumatic tires.

This was a separate niche that continued to evolve in time and still exists today. The present kick-bike concept that features a smaller rear wheel was established in 1994 in Finland. An official competition called Foot Bike Europe has been held since 2001.

Kick Bike America brought the sport of dryland mushing to America. Maintaining the presence of this type of kick scooter has evolved to the point that we have lately seen some versions of electric kick bikes on the market.

His idea came out of (his words) “laziness.” He felt he lived too far away from his favorite restaurant to go on foot and yet too close to use a bike or a car.

His scooter was a small, two-wheeled unit and it could be easily folded and placed in a backpack. It was sold as the “Micro Skate Scooter”, the “Razor” and “JDBUG/JDRAZOR MS-130A.”  This compact scooter reignited the public interest for the kick scooter.

The Rize Of The Razor

In 1999 the Razor scooter (yep! the one we just learned about) was introduced to Japan where many young people in Tokyo began to use it as a portable means of transportation.  Their acceptance and enthusiasm for the scooter helped it gain attention and popularity all around the world. In 2001 the Razor kick scooter was declared the number one toy of the year, although many riders don’t consider it a toy at all.

Wim Ouboten of Razor fame, was also the one who envisioned an electric kick scooter featuring an electric motor with a rechargeable battery mounted on the rear wheel.

In 2003 his dream became reality when RazorUSA introduced the first electric Razor scooter.

Since then electric scooters have become a popular way to travel longer distances than one might with a traditional kick scooter.

As they gain more popularity every day, the manufacturers strive to design and create better versions with stronger but lighter frames, longer-range motors, higher speeds and smart technology incorporated.

Watching the evolution of the kick scooters in general and the electric scooters in particular, it seems like what had once been a toy, has now become a staple.

There are now well over 85,000 e-scooters available for public use in over 100 U.S. cities. Marketers predict that the total number of e-scooters world-wide will climb to 238.1 million units by the year 2028.

What had started out as inventive German children being creative with their play toys, and a lazy Swiss wanting to get to his favorite restaurant, has turned into a global enterprise that has benefited us all!

10 Electric Vehicles You Can Choose for Personal Transportation 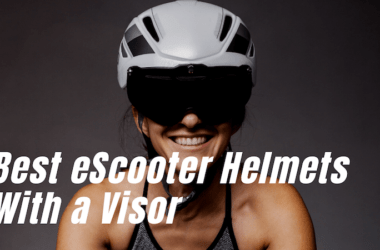