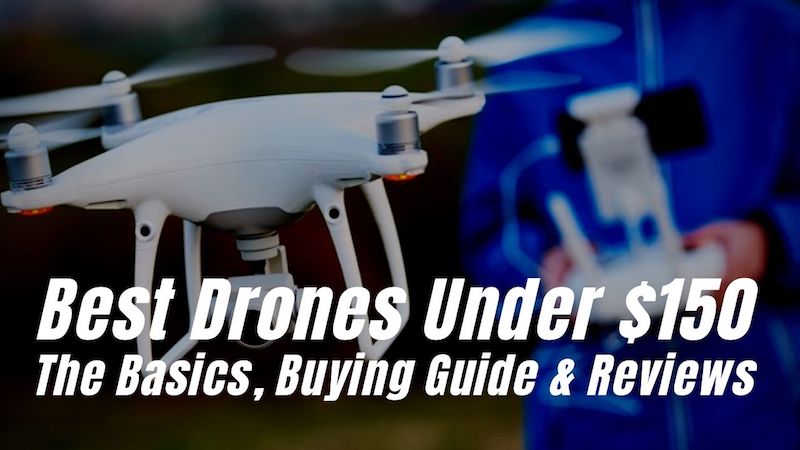 We want you to enjoy life, especially life in the city, and that’s exactly why we are going to introduce you to the best drones under $150.  It’s great when new technology arrives and then reaches the point where everyone can join in the fun. Well, not really everyone but those who realize they need to spend some quality time outdoors and need one more reason to do that.

SKIP TO OUR DRONE REVIEWS

First, let’s look at just what this marvel is.

A drone is an unpiloted aircraft or spacecraft.  Another fancy name for a drone is an “unmanned aerial vehicle” or UAV.   These UAVs are a component of UAS, an unmanned aircraft system.

The UAS includes a drone, a ground-based controller, and a system that communicates between the two.  The communication can take place between a human operator or by computer. However, computer operation is used mainly by commercial or military entities.

Typically, a drone is made of light composite material as this reduces weight and increases maneuverability.  This is particularly important for military drones that need to cruise at high altitudes.

Some drones are equipped with infrared cameras, GPS, and laser.  They come in a wide variety of sizes, with the largest being used for military purposes.  Take a quick look at one such military drone; it’s rather impressive — predator drone.

The FAA (Federal Aviation Administration) protects the usage of drones that are under 55 pounds through its regulations that pertain to recreational and hobby use.

However, at this point, there is no right way of monitoring drone usage.  There has been a massive uptick in the usage of drones by individuals, companies, farmers, and small businesses to help get work done both faster and at reduced risk.

In 2018, there were over one million drones registered in the United States.  Almost 900,000 of those registered drones were for hobbyists.  Upon registering, a hobbyist receives one identification number regardless of how many drones they own.

There were also 122,000 commercial, public, and other drones, which are individually registered. The link below will also open your eyes to more statistics on drones.

How Hard It Is To Fly a Drone?

Like most anything else, you will have to learn how to operate your drone before you can use it successfully.  And, like anything else, some models are more user-friendly than others.

A friend of a friend got his 70-year-old dad a drone for his birthday.  Within a day or two, he was operating it and sending his son Arial videos of the home his son had grown up in.  My point is that if this less tech-savvy guy can do it, there is hope for the rest of us.

I have heard two suggestions that make sense.  The first is that there are video games that simulate flying a drone and will help you get used to the controls.  Secondly, purchase an inexpensive model to learn on.  It is better to see a cheap drone take a dive than it is to see a couple of hundred of your dollars buy the farm.

Later in this article, we will show you some of the best drones for under $150.

This article shows how to’s of the take-off and landing of your drone, doing it the right way.

How Many Type of Drones Are There?

Please understand that this article will not be an exhaustive summary, but an overview. There are three basic types of drones, multirotor, fixed-wing, and single rotor helicopter.

A multirotor is the most popular type of drone and is used by both hobbyists and professionals. This type of drone gives the user more control over the positioning and framing of the camera.

There had been a financial consideration with a multirotor. Still, the advancement of cell phone technology has benefited the drone industry regarding cost and the size of components.

Most of the energy that a drone uses keeps the drone in a stable flying position. As the power comes from the battery, the maximum flying time is only about 20 to 30 minutes.

A few of the best drones under $150 are available to both the hobbyist and the newbie.  That list is coming up shortly.

A fixed-wing drone uses the same principle that airplanes use to generate lift.  The drone uses wings instead of the vertical thrust generated by rotors.

These drones can travel long distances and can stay in closer proximity over points of interest. They can use gasoline engines, and because of this advantage, they can stay in the air for over 15 hours.

The fixed-wing drone does have drawbacks for the hobbyist.  This drone cannot hover, which puts them out of the game for taking aerial photos or videos.

Both are taking off, and landing can be difficult.  You need a runway or catapult to launch them.  To recover them, you will need a runway, parachute, or net.

They are both costly and difficult to learn how to fly. Learning to operate a fixed-wing is not for the weak, and their desirability has been eclipsed by the multirotor that are cheaper and easier to fly.

Where a multi-rotor uses several rotors, a single rotor (as the name applies) uses just one rotor to generate a vertical lift.  A tail rotor controls the heading.

These types of drones are used primarily in manned aviation; they are rarely used in the hobbyist community, but it is worth mentioning.

A single-rotor helicopter is harder to operate than a multi-rotor. Still, it is not as difficult as a fixed-wing drone.  The skills needed to operate this drone can be learned as you go, but they are not as stable when flying them.

READ  10 Electric Vehicles You Can Choose for Personal Transportation

These drones also require more mechanical maintenance because they are more complex than a multi-rotor.

Hybrid drones are a relatively new invention.  They were created to combine the longer flight times of a fixed-wing drone with the vertical take-off and landing of a single or multirotor.

Also known as VTOL (vertical take-off and landing) once airborne, these same propellers change orientation to provide horizontal propulsion. The result is a drone that can fly with the efficiency of a fixed-wing drone but can take off and land anywhere like a rotary-wing drone.

Currently, there are a limited number of these types of drones on the market, and their cost is high.  One example of this type of design is Amazon’s Prime Air delivery drone.  As advances in this technology are achieved, they will come within reach of the general public.

Fairly new on the market is a foldable drone. The obvious difference between a foldable drone and one with motor arms is that the arms can be folded to the sides of the drone when it is not in use.

The advantage is that they are easier to store and transport.  Some can even fit in your pocket.  The majority of foldable drones have the same features that their less flexible cousins do.  ​

One of the drones in our pick for best drones under $150 is one that is foldable.

A niche category of drones, they are growing in popularity very quickly.  They are referred to as ROVs (remotely operated vehicles), and their target audience is professional users.

Professionals use them for filmmaking, scientific research, exploration, and ship inspections. Most water drones are also equipped with headlamps for visibility below water.

These drones have to be tethered to a floating beacon or buoy by a cable at the surface of the water.  This makes sure that the drone does not take an extended vacation at sea.

We have listed five drones under $150 for you to consider.  It is a small price to pay for a lot of fun and entertainment.

In the descriptions below, you will see “headless mode” mentioned as a feature.  This does not mean you have to be a horseman to operate it; it means that it’s a method implemented on a drone that allows the pilot to give up worrying about orientation.

It’s pretty simple, before taking off, you are required to position the drone so that its front is your front.